Craig “Leftside” Parks “Half the story has never been told”, Peter Tosh once observed. And so it is with Craig “Leftside” Parks: The Jamaican drummer, keyboardist, disc jockey, producer, and artist is so versatile that it can be difficult to grasp the full scope of his accomplishments. Equally at home performing classical roots reggae or shaping the cutting-edge sounds of 21st century dancehall, Leftside’s work is heard everywhere, yet he remains an enigma to much of the public. He’s a man of many talents who goes by many names. Some know him by aliases like “Leftside” and “Mr. Evil”, other might have seen him playing drums for Bounty Killer on stage or touring as Sean Paul’s road DJ, but in the beginning he was simply Craig Parks, a young man born amidst the best of reggae music. As a toddler he accompanied his father, the legendary bass player Lloyd Parks, to rehearsals with the world renowned “We The People” Band. “The foundation drummer was Devon ichards”, recalls Craig Parks. “When he was playing I used to sit there and watch. And then I went around back and I used to make my own drum set out of supermarket boxes and stuff like that. At that time I was about like 6, 7… That’s when it all started.”

While he was still a student at Ardenne High School in Kingston, Jamaica, Parks played in a band called Duplicate with his brothers and sisters. “We even did a couple recordings at that time,” he says. “But because of school, we really couldn’t do much.” By the age of 18, Craig was playing drums in his father’s band, for reggae legends like Dennis Brown, Gregory Isaacs, and John Holt, as well as visiting R&B acts like Main Ingredient. “Yeah man, the resume is very good”, he observes with a confident chuckle. “Trust me”. But long before he began providing musical accompaniment for vintage Jamaican stars, Parks had begun exploring the future of Jamaican music. Starting around 1995 he began working as a selector (or disk jockey) on Syndicate Disco, a well-known sound system in Kingston whose reputation was established by selectors like Zachary Harding (brother of dancehall producer and future Sean Paul manager Jeremy Harding) and Arif Cooper (son of Craig “Leftside” Parks Third World bassist Ibo Cooper). Harding and Cooper noticed that Parks always cut and scratched with his left hand. They called him Leftside, because, he explains, “My left hand does everything, and I was better at scratching on the left side”. After a few years, Parks and his high school friend Matthew “Esco” Thompson (the son of sound engineer Erroll “E.T.” Thompson) moved on to start their own sound under the name Leftside & Esco. They soon distinguished by the strength of their innovative “dubplate specials”, exclusive self-produced recordings that could be heard only on their sound. “We built riddims for the sound, and then would write the dub for the artist,” Leftside explains. “That created a huge difference in the sound system era. We got a lot of recognition for that, until we started just recording our own songs.” Leftside & Esco released their first 45 single with producer Richard Birch of Shaggy’s Big Yard camp. The song was called “Passa Thing,” a scandalous cut that featured Esco as gossip-mongering entertainment journalist interviewing a wide range of dancehall artists all flawlessly imitated by Leftside. “I like impersonating people like Bounty Killer, Baby Cham, and Bling Dawg,” he says. “When we did the video for that it got crazy play.” Fortunately, the artists involved all took the song in good humor. “They loved it,” Leftside recalls. “When Bounty was performing, he would call us up to do that song with him. That kind of put us out there.”

Meanwhile Parks was such a prolific beat-builder that he sought other outlets for his innovative dancehall riddims. He caught the production bug in 1996 when his eldest brother, keyboardist Noel Parks, gave 16 year old Craig his first drum machine. “It was a Roland, and that’s all I remember it was very old”, Craig recalls with a laugh. “I was always a fan of the old-school dancehall like Dave Kelly era and Steely & Clevie and Sly & Robbie. So I used to build tracks like theirs. I was just messing around, and my brother told me that I had the talent to build riddims.”

The following year, Craig linked with veteran producer Cordell “Scatta” Burrell and began releasing riddims on a label called Kings of Kings. The earliest releases were immediate hits, starting with the “Chiney Gal” riddim (including Cecile’s breakthrough hit “Changez” and Sizzla’s “Blaze Up the Chalwah”), and the “Double Jeopardy” riddim. But none of his early productions hit harder than the massive “Martial Arts” riddim (including Sizzla’s massive “Karate,” Beenie Man’s “Bad Man Chi Chi,” and Bounty Killer’s “Look Good”). “I’m really really proud of ‘Martial Arts’,” says Parks, “cause that gave me a lot of street cred in Jamaica and in England and places like that. Everybody knew that I did that track. Everybody.” (Both Leftside and Esco went on to play in a band called Martial Arts which backed dancehall stars Wayne Marshall and Bounty Killer.) Leftside & Esco established their own Pacemakers label in 2001, and began cranking out hit songs as both producers and artists. But Leftside continued working with other labels as well. He produced a full Sizzla album with Kings of Kings, as well as building riddims (sometimes without credit) for Stone Love label and Q45, Elephant Man’s manager. Leftside played the music for stand-out tracks like “Tall Up Tall Up” and “Bad Man A Bad Man.” When Elephant began working with Don Corleon, Leftside stepped in to play keyboards on Elly’s biggest international hits, “Pon Di River Pon Di Bank” and “Signal Di Plane.” Propelling him to a household name where Leftside’s extensive productions and track work on Bounty Killer’s 2002 double disc Ghetto Dictionary, Wayne Wonder’s internationally successful 2003 No Holding Back album, Sean Paul’s multiplatinum album The Trinity (Atlantic 2005). By 2005, Leftside & Esco began focusing on performance. Songs like “Stay Far” and “Wine Up Pon Haar” became dancehall favorites. Their biggest hit to date, a humorous sexy single called “Tuck Een Yuh Belly,” topped the Jamaican charts for 9 weeks as well as cracking the charts in Trinidad, England, and Canada. “That ‘Throwback Giggy’ riddim was our production,” says Leftside of the smash track also featuring hits by Buju Banton and Vybz Kartel that was widely credited with reviving the raw energy of ’90s dancehall.

Leftside is just old enough know about vintage reggae, just young enough to keep up with the latest dancehall, and wise enough to avoid the confusion that can come with hip hop fusion. Where so many Jamaican producers water down their sound with “hip hop remixes,” he’s determined to win international attention without changing his style. “What I realize with the hip hop market, they don’t try to change their formula,” Leftside observes. “The only thing that’s different is new equipment, so you’re getting new sounds. But the groove is still the same. So they’re able to flow and keep that level of music for the people. That’s what I try to do with dancehall… Keep that formula that drew people from other countries to our music. I try to change the sound a little bit, and you done know it’s a bit more lyrical, but I still try to keep it simple, and as bare-knuckle as possible. That’s the real hardcore dancehall. And it works, cause all of my riddims still play in parties, where others fade away.” As accomplished as he is as a producer, Leftside says he could never give up the thrill of being performing. “I love it 50/50, you know I mean?” he says. “Me being an artist helps me to develop myself as well as my production, and I can deliver an album on my own. I love developing other artists, but I love being an artist too.” With Esco going his own way in recent years, Leftside’s now rocking as a solo artist. But he does have a new sidekick of sorts in his demented alter ego “Mr. Evil” a spontaneous idea that took on a life of its own.

“I was in the studio doing dubplates for Renaissance Disco, and Austin Powers the movie was on,” Leftside recalls with amusement. “I just started freestyling in that Dr. Evil voice, and the guys from Renaissance loved it. They played it on dub at Bounty Killer’s birthday bash, and it was the tune for the night.” By the next day he was getting calls from as far away as Italy and Germany requesting “Evil” dubs. But Mr. Evil’s biggest break came with the brilliant 2007 track “More Punany,” a song that sums up Leftside’s many gifts in one 3minute track. The riddim blends a futuristic digital beat, a chopped and screwed vocal loop, and a sample from a classic “Real Rock” version “my father played the bassline on it,” he says, “so that’s why I took it.” Then comes Mr. Evil’s bugged out flow with its distinctively syncopated stutter and rhymes like “punany” and “tsunami.” The song was not only a smash in Jamaica but also hit the top of Italy’s dancehall chart as well as breaking into rotation on Hot 97FM New York, America’s leading hip hop station. On the strength of that record’s impact, Leftside signed a deal with NY based Sequence Records to release his debut album in 2008.

With his newly established Keep Left Records label, Leftside is setting his sights on the next level and developing other artists like Keida and Syon without losing touch with the source of his inspiration. His latest riddims, like “Hot Winter”, “Dem Time Deh”, and “Drop Drawers” are winning a strong reception across the Caribbean. He says he’s being “very selective” about working with other producers although he did record two singles for producer Steven McGregor, an anti-haters song called “See Dem A Pree” on the “Dark Again” riddim, and “Stamina Man” on the “Two Thousand Seventies” riddim. Leftside likes the idea of joining forces with the son of reggae legend Freddie McGregor. “I’ve actually played drums for Freddie live”, Leftside explains. “So he’s very happy that I’m doing work with his son. It’s like a dream for him, for his kids and his band mate’s (Lloyd Parks) kids to link up and do work together.” Whatever you call him, one things for sure: you’re going to be hearing a lot more from Craig Parks as he takes his rightful place as one of the biggest talents in Jamaican music. 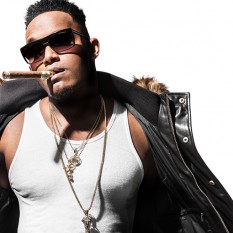 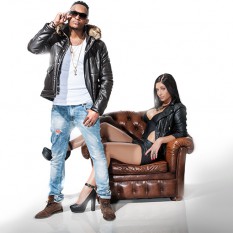 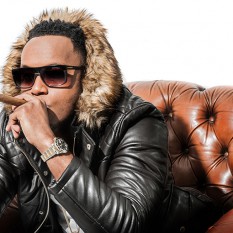